Phoenix Alumnae have supported Phoenix Day School for the Deaf since the 1970's. Alumnae used to hold Halloween parties for the younger students. Since 1983 we have given scholarships to graduating seniors. Several members of the Phoenix alumnae chapter attended the first high school graduation in 1983 at Phoenix Day School for the Deaf since becoming fully accredited by the State of Arizona. Shown are Phoenix alumnae presenting scholarship to graduate Tina Champion to help defray costs of attending Gallaudet College. As pictured in the 1983 Lamp l-r are Susan Norman, Pat Wells, graduate Tina Champion, Claudia Hosking and Marge Poe. Our scholarship program continues today. The scholarship award is now named the Delta Zeta Phoenix Alumnae/Claudia Edwards Hosking Memorial Scholarship. A tribute to Claudia, our long time Philanthropy chairwomen. 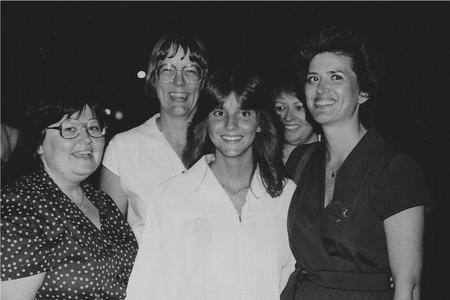 Even though Delta Zeta Alumnae chapter did not receive its official charter until 1948, we have evidence of DZs meeting well before that date. Rosalind Fowler Keen, a DZ, was the forth President of Phoenix Panhellenic Assocation in 1923-1924. Back in the early days of Arizona, many Panhellenic groups met socially and not as a recognized chapter. And women also joined Panhellenic and their sorority groups.

On October 24, 1943 Delta Zetas observed Founders Day at the San Carlos Hotel, French Cafe. A history of DZ was presented including the fact that we had 56 active college chapters and 69 alumnae clubs and associations. Of course the decorations included nile green and rose.

Dinners, potlucks and bridge parties seem to dominate the sisterhoods in the 1940s. Speaker topics included rushing, camping for youth in war time and a round table discussion on rent control.

In 1944 Delta Zetas joined with Phoenix Panhellenic and United Services Organizations in providing hostesses and to furnish food for the coffee hour at the new USO club. This club was for women in the service and stationed in the valley.

It is interesting to note that the summer meetings in the 1940s were family picnics at En Canto (spelled Encanto now) park as the members enjoyed being outdoors.  Alumnae were also working on layettes for Norway and gathering reading materials for Arizona States Sanatorium patients. 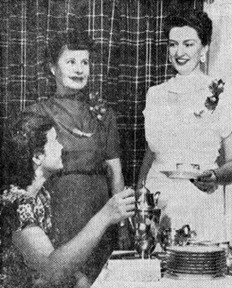 Photo at right is from a Phoenix Alumnae May Breakfast in 1949 at En Canto Park.